I’d forgotten how it feels. The morning after. The sore head, the dry mouth, the general grogginess. Waking up feeling a little disoriented as to how you got to bed and thinking did that really happen last night? The feeling of having had a great time mixed with the slight dread of the effort now required to proceed with the day ahead.

I know I didn’t have 5 glasses of prosecco washed down with a rum and coke and then that tequila shot someone thought was a great idea when the DJ played La Bamba, so why do I feel like I did? What I actually did last night was perform in a two hander 90 minute show but somehow it still feels like I went out on the razz. This is my first show of this length for almost 2 years and I’d quite forgotten the energy required to do it.

I tour with Spiltmilk Dance (very fun company, check out their website here) who do LOTS of rural touring. Village halls, community spaces, churches, libraries, leisure centres, you name it we’ve done it. From cupboards to toilets, and church offices to glory holes* we’ve used every kind of space available for getting ready for shows. And this is only my second of the big tours.

Last night was my first show of the current work Desert Island Flicks with the fabulous Sarah, co-artistic director of the company. Rehearsals were spread throughout January and having focused my energy on learning the show I’d given no thought as to how I might feel today. Well why would I? I’m not paid to think about today. Today isn’t the important bit, last night was. Only we have got another show tonight…

I feel hungover. Did I mention that?

I remember touring The Little Love Cabaret in 2018 and wandering around Diss in Norfolk when we had a run of shows down there. A lovely little town. Rhiannon one of the guest artists found a skirt in a charity shop and suggested I buy it.

I like that skirt. It reminds me of a nice day out with nice people but dying inside feeling hungover as hell. If anyone has any photos from that day I’d be at the back downing an orange lucozade.

Really? Did you just write that? Pipe down.

My PSH’s were just as bad at 20 as they are at 30. What I’m saying here is that I’d forgotten from the last tour how they feel and actually that they are even a thing. Now I know they are definitely a thing. For me anyway. I’ve done shows since then but they’ve been day time performances at festivals and in care homes, scratch nights and generally just smaller shows with a lot less gear.

I can’t believe how rough I feel. I’ve got blurry eyes. I was once told the amount of adrenaline performers can use on stage and the effect it has is equivalent to being in a minor car crash. Sorry people who’ve experienced minor car crashes, but I totally believe that. Dramatic yes, but then we do deal in the dramatics don’t we darlings?

Last night I got home at midnight. Had a cup of tea, 2 slices of toast & a cream egg. A shower, where I spent at least 4 minutes scrubbing my stage lipstick off and got into bed at 1am. I woke up at 8.45am and assuming I was in a deep sleep by 1.30 (who are we kidding, deep sleep by 10 past more like) that gives me a total of 8.15 hours sleep. The recommended daily amount and then some.

So why do I feel so rough?

What am I complaining about??

You got the sleep didn’t you???

Yes but I guess that’s not taking into consideration what I did in the 8 hours leading up to getting the sleep. Because as well as the 90 minutes performance, there’s a whole chunk of physical prep going on before and after…

Yep, that’s showbiz baby! And I love it.

Right enough of this hangover shock. Time for some brunch, a bath and yoga. That’ll get me where I need to be, ready to spring into action for tonight’s blockbuster show. Bring it on!

Some snaps of us last night pre and post show (note the very happy and pleased but tired looking eyes in the after picture!) 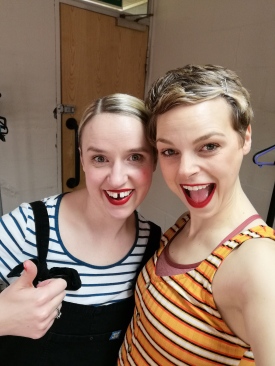 * Glory Hole definition: an untidy room or cupboard used for storage (there are other definitions but I’m pretty sure the local promoter meant this one) *